'Sharper Edges/Tell Us What You Really Think'

The Arts Commission commissioned artist and urban planner Rosten Woo to develop an art project that would amplify the Cultural Equity & Inclusion Initiative.

The result, Sharper Edges/Tell Us What You Really Think, offered a second vehicle during town halls to elicit community input from those who might be reluctant to speak bluntly at a large meeting, or at a gathering that might include their community members, arts peers, or potential employers or curators. In this interactive project individuals spoke privately, via a text exchange with the artist or his surrogate, about their experiences of diversity, equity, inclusion, and access or lack thereof.

The interviews were transcribed, randomized, and then projected on a screen on a rolling scroll during town hall gatherings.

"I'm Mexican, but I'm also from Los Angeles, so I like a lot of different types of culture. I'm not just Frida Kahlo and flamenco dancing. My cultural richness goes beyond an “artistic program for Latinos.” The people working in the arts need to learn that equity is not about underestimating my identity. Every time there's an art event, it's like the city just wants to throw hot sauce and mariachi music at us. We are all much more than that. Why segment the arts by race and instead learn to be inclusive and collaborate?" —Project Participant 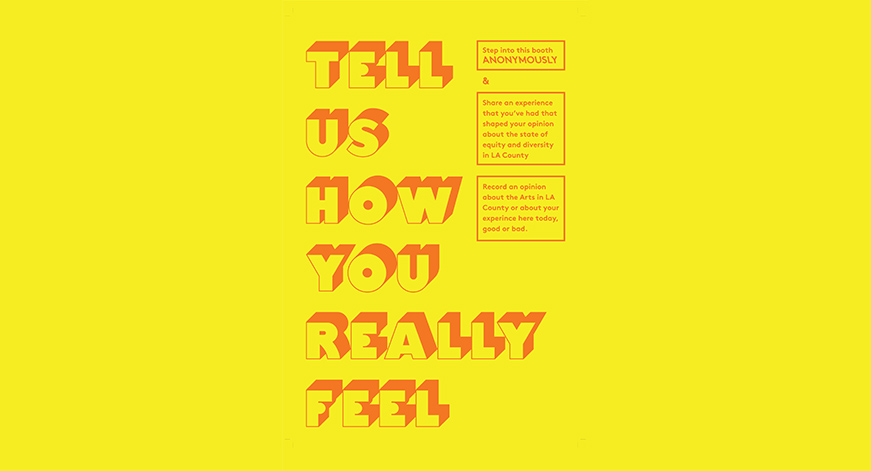 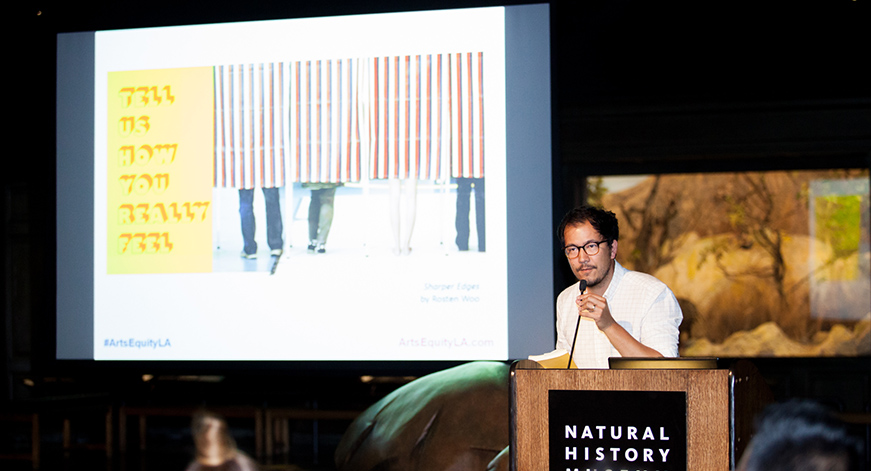 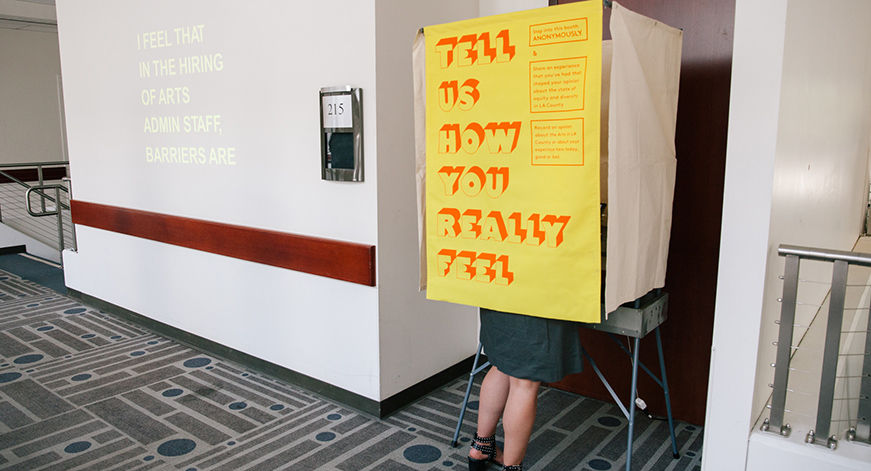 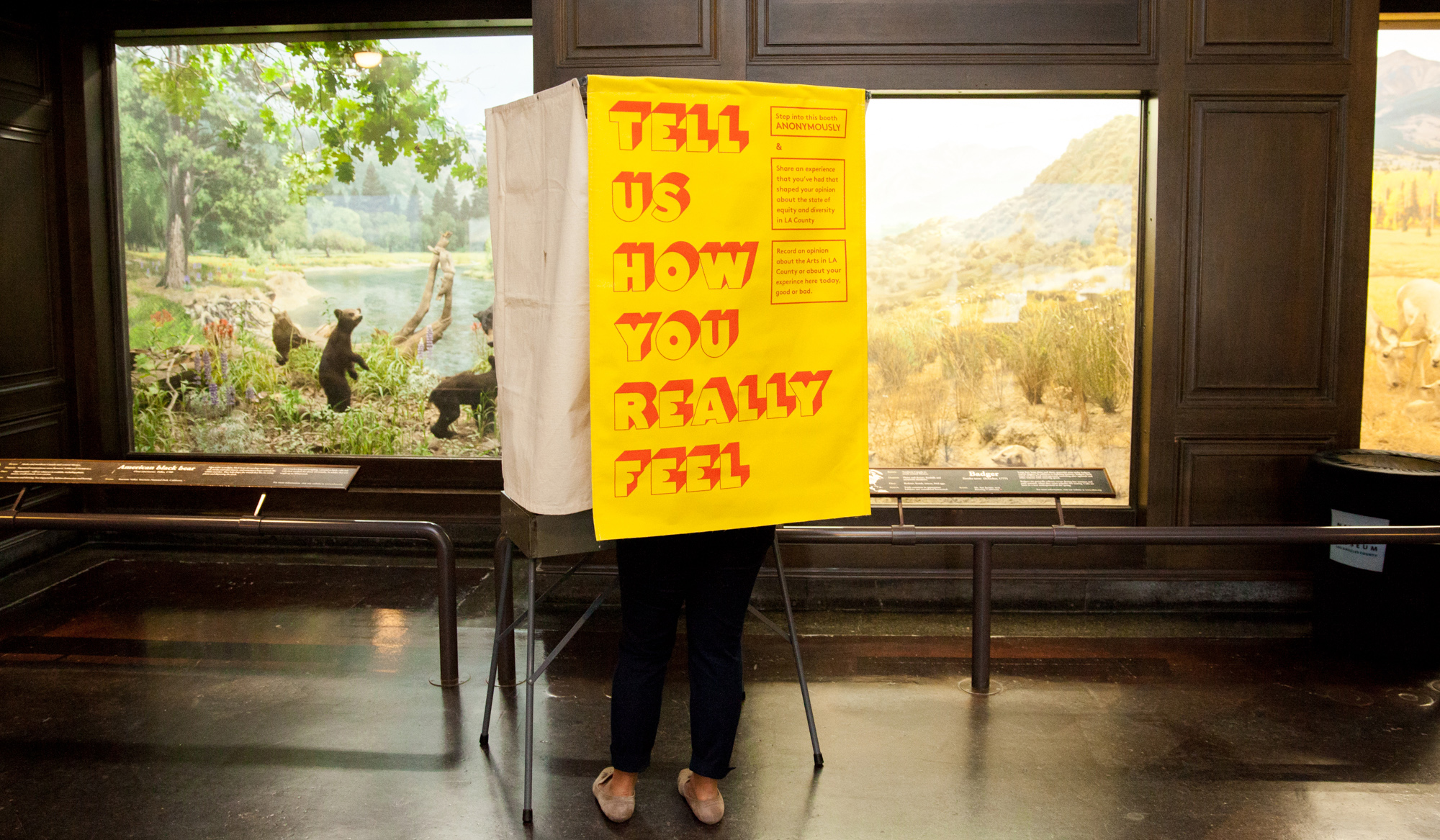 "Art and theater experiences don't need to be watered down for working class audiences. A few summers ago the LA Opera staged free performances out on the courtyard of the Dorothy Chandler Pavilion. That stood out among other types of free outdoor events. Class is inextricably bound up with culture. Staging free operas outdoors felt at least like an attempt to strip an art experience of its social freight—THAT's the part that often alienates people, not necessarily the art itself." —Project Participant

Rosten Woo is a designer, writer, and educator living in Los Angeles. He produces civic-scale artworks and works as a collaborator and consultant to a variety of grassroots and nonprofit organizations. His work has been exhibited at the Cooper-Hewitt Design Triennial, the Venice Architecture Biennale, Netherlands Architectural Institute, Storefront for Art and Architecture, Lower East Side Tenement Museum, and various piers, public housing developments, tugboats, shopping malls, and parks in New York and Los Angeles. He is co-founder and former executive director of the Center for Urban Pedagogy (CUP), a New York Based nonprofit organization dedicated to using art and design to foster civic participation, winner of the 2016 National Design Award for institutional achievement. His book, Street Value, about race and retail urban development, was published by Princeton Architectural Press in 2010.

He teaches art and design at the California Institute of the Arts, Pomona College, and Art Center College of Design and has lectured internationally at such institutions as the Netherlands Architectural Institute, Brown University, the University of Chicago, MIT, Princeton, the Maryland Institute College of Art, the California College of the Arts, and the Chicago Art Institute. He has served on the boards of the Los Angeles Forum, Place in History and Groundswell Community Mural Project.