"I love that the mission here is something I believe in. I know personally how much impact the arts can have—not just to make a person creative or an artist, but to make them a better person.” —Alexis Camins 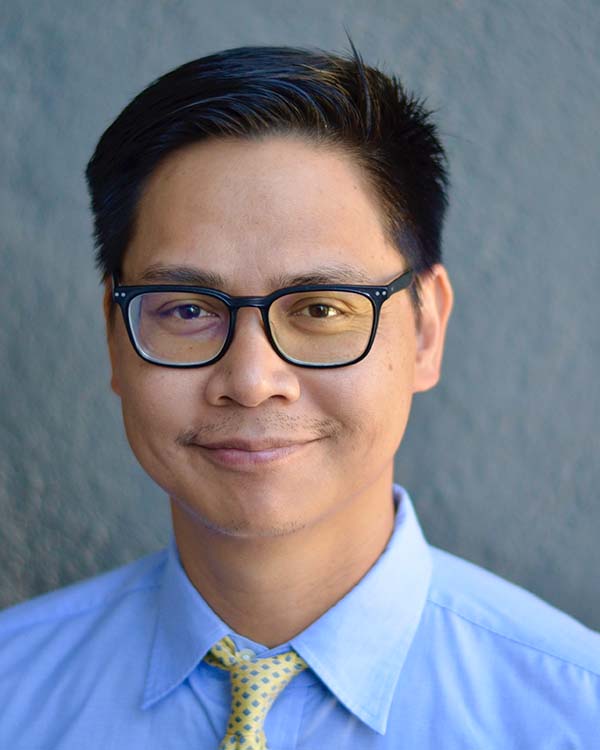 Alexis Camins moved to the Bay Area from the Philippines when he was 9 years old. When a friend dragged him to audition for a musical in high school—42nd Street—his fate was sealed. "I just fell in love with theater. I fell in with being on stage, with being around friends that wanted to express themselves. I felt like I had met my people," he says.

When it was time to think about college, he was guided by something he read once: “You’re not just choosing college, you’re choosing the city your college is in.” He had never been to Westwood, and didn’t really know Los Angeles, but he got into UCLA and made the move. He remembers driving down Sunset Boulevard and thinking, “This is amazing. I made the right choice.”

Alexis knew in high school that he didn’t want to study anything but theater, so he took AP courses to check off basic requirements and then at UCLA, he chose only classes that were connected somehow to theater. He loved being exposed to new people, even to the Hollywood kids who were only in school until they got film and TV jobs. There were other revelations too. Two years in, he met his future wife, Cindy, during a dorm production of A Chorus Line.

He also learned that his race could change his stage opportunities. "I came from a very diverse high school, and every production had every color, shade, and hue of actor. We didn’t even think about color matching when it came to casting. A drama teacher told me once, 'It’s not going to always be like this, Alexis. You’re not going to have a Black mom in plays.' We were living in this safe bubble of protection, there was just no thought about it. So, when I got to UCLA, there was this new thing—I had this Asian identity that I had to deal with—and it was something I had never really thought about in terms of acting."

After UCLA, he applied to three grad schools, got into NYU, and moved to New York. Cindy, a dancer, relocated with him. She picked up a paralegal job, and they found an apartment in Astoria. Alexis acted, bartended, painted houses, and worked at temp agencies. But the acting was the highlight. He performed in venues like the Manhattan Theater Club, the Ensemble Studio Theater, and La Mama. He did shows in DC and Boston.

"We stayed for 13 years," Alexis says. "All of us complained about our day jobs and our small apartments, but the struggle was fun because there were so many friends doing the same thing. We were all so supportive of each other, going to each other’s shows because nobody had their families around. It was such a community."

It took a few years for the 2008 recession to hit East Coast law firms, but when it finally did, Cindy was let go from her paralegal job. Alexis got a tech support job—it wasn’t a big stretch, because he likes talking to people, tinkering with new technologies, and solving problems. The couple had their first daughter, Audrey, so a bigger living space and help from Cindy’s parents in Southern California started to sound good.

Alexis applied to the LA County Management Fellow Program while still living on the East Coast. He thought, like he had before, that he would let the chips fall and consider whatever happened as a sign. Managed by the Department of Human Resources, the program is a two-year paid fellowship for people with a graduate degree who want to pursue a career in County government. Sure enough, he got in and joined the Data Management and Analytics team at the Workforce Development, Aging and Community Services (WDACS) department in 2016.

He and Cindy had their second daughter, Cora—both of whom love to dance like their mom. Alexis settled into the County, but continued to act and write a bit. When he saw an IT Manager opening at the new Department of Arts and Culture, the timing was perfect. "It was the one department in the County that I would want to be at, so I was ready to transition," he said.

"I love that the mission here is something I believe in. I know personally how much impact the arts can have—not just to make a person creative or an artist, but to make them a better person. So, I think art should be accessible—civic art should be part of the public discourse, not just stuck in museums. A Broadway show is going to have no problem getting to The Music Center, but a small company needs support. The goal to make art accessible, you can always go back to that—that’s the guiding thing.”