To save this page, please use the following URL:
https://www.lacountyarts.org/civicart/objects-1/info/15 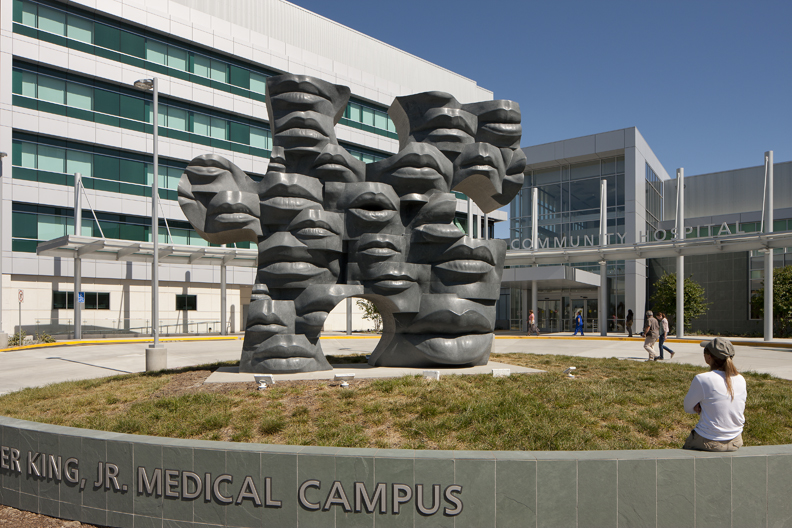 The sculpture by artist Lawrence Argent titled Pieces Together is a tribute to the legacy of Dr. King, the local community and the power of the collective to affect positive change. Pieces Together was created through a community engagement process. The design was inspired by the idea of being one part of a whole where, like a jigsaw puzzle, each piece is integral. Argent saw parallels between the symbol of a puzzle piece and all the voices of a community. To hear individual voices first hand, Argent spent a week in Willowbrook interviewing 32 local residents and encouraged the participants to tell their personal stories. At the conclusion of the interviews, Argent collected three dimensional data scans of each individual’s lips. The facial scans were massed together, forming one side of the sculpture that from afar looks like undulating topography. Enlarged to a monumental scale, the uniqueness of each individual is magnified. Following the curve of the entry roundabout where the artwork is located, the viewer encounters the other side where a spiral passes through one open mouth, signifying a single breath that unites each voice into one. The artwork was constructed as a puzzle within a puzzle. Carved of gray granite and comprised of twelve separate pieces, each was carefully engineered to fit together seamlessly. The result is a monument to the community reaching 18’ high, 7’ wide and 20’ long and weighing 110 tons. Learn more about this artwork by visiting http://lacountyarts.org/PiecesTogether

Born in England, raised in Australia, currently lives in Denver, Colorado
EDUCATION: B. A. (Sculpture) Royal Melbourne Institute of Technology, Australia; M.F.A. Rinehart School of Sculpture, Maryland Institute, College of Art, Baltimore, Maryland.
He was a professor of art and the head of sculpture at the University of Denver’s School of Art & Art History. In 2002 he was awarded the University’s Distinguished Scholar Award. Argent has been an artist-in-residence at the John Michael Kohler Arts Center, the Glassell School of Art, Fine Arts Museum of Houston, and the Georgia Fine Arts Academy. He has been the recipient of numerous awards and grants including the Pollack-Krasner Foundation Grant, the Colorado Council on the Arts Fellowship.
Argent is known for his multi-media sculptures and indoor and outdoor installations. His work blurs the distinction between high art and low art. His non-hierarchical strategy pulls from representation, conceptualism, humor and a jolt of mischief, all designed to make people examine their surroundings, their intentions and their lives. His explorations of form and concept relate to place, culture, and the innate sense of human curiosity. He gained visbility and notority for some of his large scale Public Art projects around the globe. He was an artist that utilizes assorted mediums and venues to engage the viewer in questioning the assumed. Somewhat providing a vehicle by which stimulus opens a plethora of response that defies a name.