To save this page, please use the following URL:
https://www.lacountyarts.org/civicart/objects-1/info/163 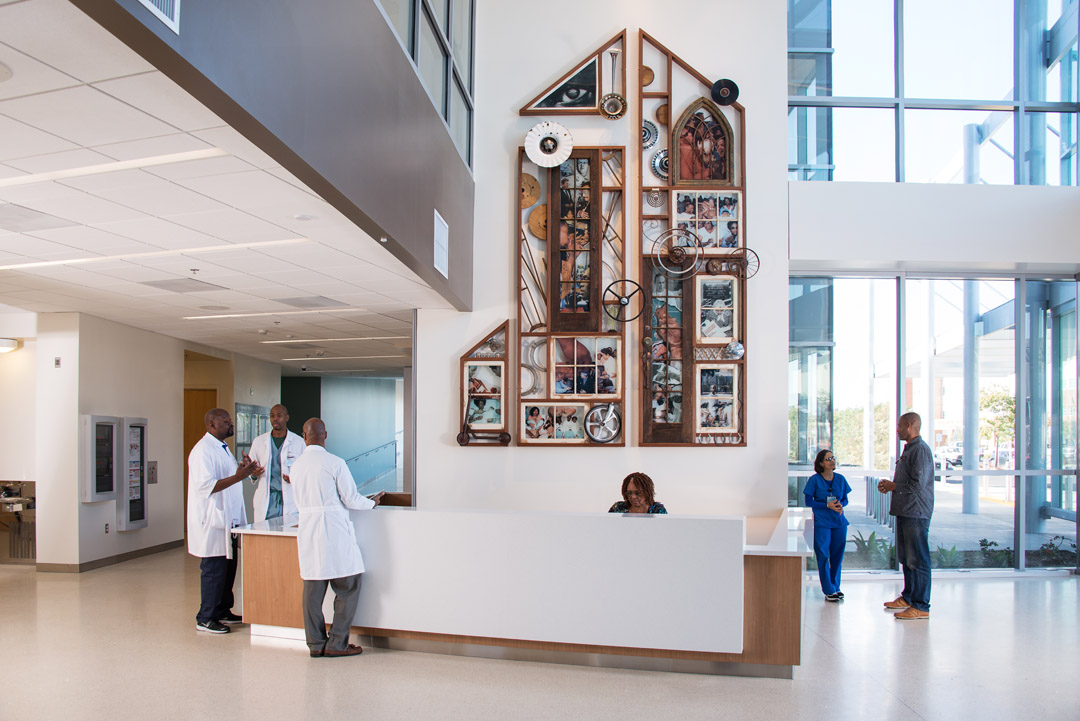 A Healing Home by Los Angeles based artist Dominique Moody is an assemblage, a process that creates artworks out of found objects and materials. Moody looked through boxes of old photographs in the Martin Luther King Jr. Hospital archive, finding documentation that underscored the significance of the hospital’s opening and the important role it played in the community. To incorporate the photographs into the artwork, Moody scanned and arranged them into nine thematic collages: King’s Vision, A Ray of Hope, Call and Response, Senior Power, Boy on Horseback, Care Giving, Welcome to the World, First Baby Born and Each One Teach One. Each collage constructs new narratives that inspire the viewer’s memory and connection to history. Fabricators printed the collages onto glass and mounted the glass within a framework created by repurposed windows and doors. Moody used additional items from various sources and flea markets throughout Los Angeles to add additional meaning. The patina, rust, weathered paint and darkened wood convey the passage of time. She incorporated several elements, such as wheels, crutches and horseshoes to reference the idea of mobility and the cycle of life. All the elements were then secured to 1,500 year old redwood salvaged from a bridge in Bakersfield, California. The outline of the redwood frame forms a home. It offers a conceptual and visual contrast to modern architecture of the Outpatient Services lobby, adding warmth and reinforcing the core principles of compassion, care and transformation.

Born in Augsburg , Germany in the nineteen fifties, by the age of four Dominique Moody's family relocated to Philadelphia where they moved about like urban "Nomads". Creativity came early and was nurtured by the family and mentors. An eclectic background of exploration into ceramics, painting, drawing, photograph and music led her towards assemblage after her eyesight began to change in her late twenties.
Her subject matter began to focus on her life experiences and this journey carried her further into assemblage installations from found objects. Inspired by the challenge of seeing differently Dominique's work has been placed in the collections of private and public spaces in the US and abroad accumulating awards and grants as she has lived in four countries, five states and eight cities.
For the past few years she has been working on the Nomad, an assemblage house on wheels hitched to a 1950 work truck, taking her art of found objects to the road as a narrative for "Art for Life's Sake". For almost three years, she lived in Watts, Los Angeles as an artist in residence at the R Cloud House directly across from the landmark Simon Rodia Towers and Watts Towers Arts Center, were the Nomad began to take shape.
Today she is a resident at the Zorthian Ranch in Altadena where before her completion and departure of the Nomad she will create, "The Healing Home", commiesionedfor the new Martin Luther King Hospital in Willowbrook. This large assemblage work will be the first of many for this "Nomadic" artist on her continued journey.