To save this page, please use the following URL:
https://www.lacountyarts.org/civicart/objects-1/info/782 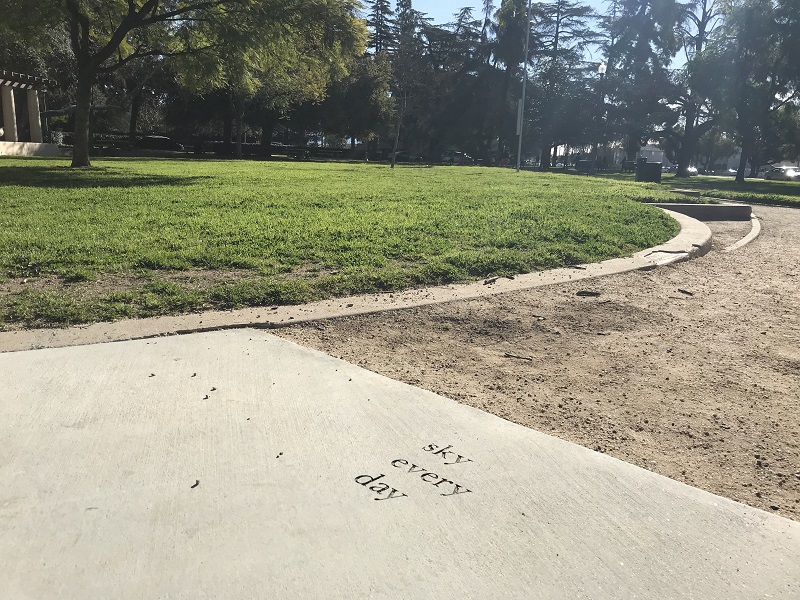 As a part of a rennovation plan in Michillinda Park, the committee selected four poems from artist and poet Aram Saroyan to be engraved in concrete throughout the pathways of this park.
To celebrate five minimalist poems by Aram Saroyan etched in the concrete walkways of Pasadena’s Michillinda Park, the Los Angeles County Arts Commission hosted a poetry reading by Saroyan in the park on Saturday afternoon, August 11, 2018. Aram Saroyan is widely known for his minimalist poetry, and the five poems engraved in the park are famous examples of his work. Joining him for the reading were celebrated Los Angeles poets Holly Prado, Harry Northup, Phoebe MacAdams, and Michael C. Ford. Each poet read for ten minutes, and the reading will concluded with winning poem chosen from the Parks After Dark writing program.

About the Artist
Aram Saroyan is a poet, novelist, memoirist, and playwright. He attended the University of Chicago, New York University, and Columbia University, but did not complete a degree. The son of the writer William Saroyan, Aram made his debut as a writer with six poems and a review of Robert Creeley's novel The Island in the April 1964 issue of Poetry magazine. He became famous for his one-word or “minimal” poems, a form he developed during the early and mid-1960s, and which is often linked to Concrete poetry. Saroyan is also frequently linked to Second Generation New York School Poets and conceptual art.

Saroyan’s honors and awards include fellowships from the National Endowment for the Arts. A former president of PEN USA West, he has previously taught on faculty in the Masters of Professional Writing Program at USC. He lives in Los Angeles.