To save this page, please use the following URL:
https://www.lacountyarts.org/civicart/objects-1/info/700 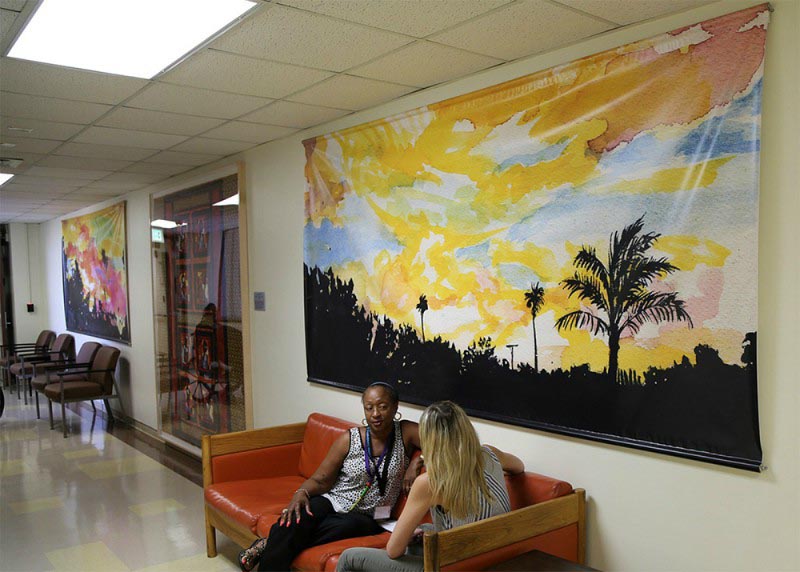 The Recuperative Care Center (RCC) at the Martin Luther King Medical Campus in Willowbrook, CA provides interim housing to help stabilize homeless patients who would otherwise remain in the hospital without a suitable discharge option. With a targeted average length of stay of four to six weeks, the RCC program supports 900 to 1,400 patients per year. Clients have access to a range of support services to assist them in achieving independence and ultimately prepare them to move into permanent supportive housing. The Martin Luther King, Jr. Recuperative Care Center Project is delivered in two phases. Phase one is a loan of 26 artworks from artist Sandy Rodriguez for display at the facility. Phase two is an Artist-in-Residence program led by Rodriguez at the RCC. The paintings, a series of expressive watercolor and oil landscapes, were created with foster youth at community art space Art + Practice in Leimert Park, and with residents in the View Park/ Windsor Hills neighborhood through a civic art project called Some Place Chronicles. Rodriguez developed and implemented art program with staff of the Department of of Public Health that helps support patients’ transition into housing resulting in series of watercolor paintings made into prints on display at the center. The project at the RCC continues Rodriguez interest in engaging the people and communities of South Los Angeles.

Artist Biography
Sandy Rodriguez is an artist and independent educator. Her civic art projects and paintings capture moments of transformation in the social and cultural landscape of Los Angeles, with a focus on themes of the persistence of place, activism, and physical and cultural regeneration. She was raised in San Diego, Tijuana, and Los Angeles. Rodriguez earned her B.F.A from California Institute of Arts and has exhibited at institutions such as the Museum of Contemporary Art San Diego; Art+Practice, Los Angeles; and Self Help Graphics, Los Angeles. Recent awards and residencies include: Department of Cultural Affairs Cultural Trailblazer Award (2017-18), Artist-in-Residence for Los Angeles County Arts Commission (2016-2017), and Artist-in-Residence at Art+Practice in Leimert Park (2014-15). Her collaborative book project A Place We Call Home: East of La Cienega and South of Stocker for Some Place Chronicles, a creative placemaking project produced by CalArts and Los Angeles County Arts Commission, will be available in Fall 2017. Rodriguez has been featured on CBC Radio Canada Hour le Monde, KQED Statewide Report, KPCC’s Off Ramp, Los Angeles Times, and KCET.