To save this page, please use the following URL:
https://www.lacountyarts.org/civicart/objects-1/info/47 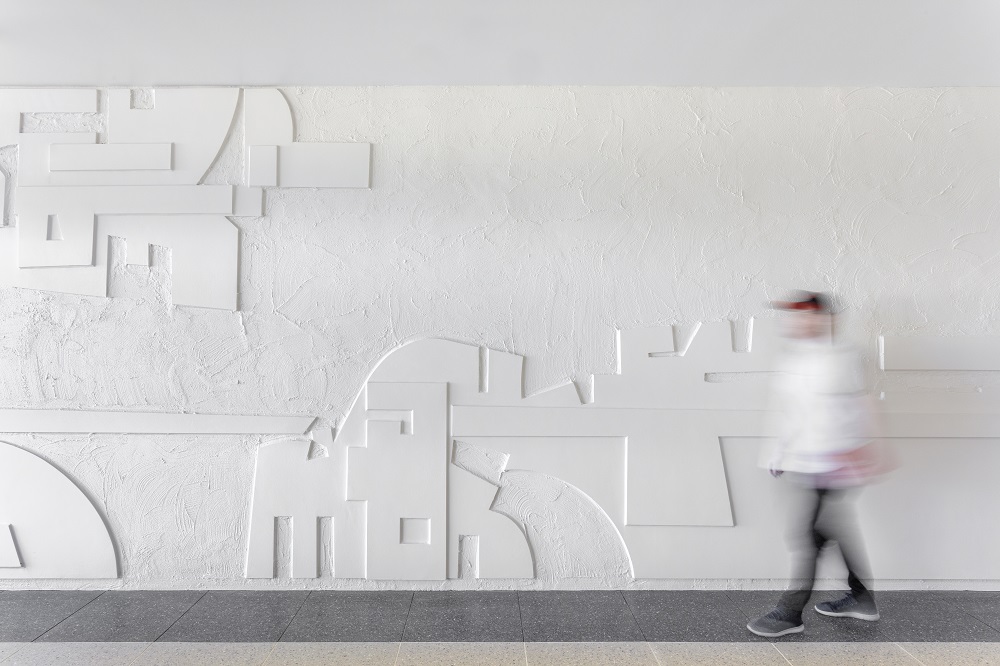 Dora De Larios created this plaster veneer bas-relief mural for the Rowland Heights Library when it was being constructed in 1978. The artwork fills an entire wall in the library’s foyer with an abstract composition of geometric shapes that rise from the floor and descend from the ceiling. Dora De Larios cut all of the mural’s plaster forms and then attached them to the wall. A master plasterer, hired by De Larios, finished the texture of the surface shapes with a steel trowel and used a brush broom for the mural’s background. The artwork represents a rare departure from ceramics in Dora De Larios’ body of work. There is only one other similar artwork she has made, commissioned by the City of Hawaiian Gardens for the city council chambers around the same time.

Dora De Larios has resided in the Los Angeles area all her life.  Born in Los Angeles to Mexican parents, she spent her childhood living downtown near Temple Street.  In 1957 she received a BFA from USC.  The ethnic diversity of Los Angeles, as well as her extensive travels and study of world religions and ancient art at USC, led to the development of her pan-cultural style.  De Larios’ public works include sculptures in Hawaii, New Jersey, Florida, Tahiti, Japan, and numerous cities in southern California.  She has also created a ceramic dinner place setting for the White House.  Since 1959 she has been featured in over 50 gallery shows and museum exhibitions including the Craft and Folk Art Museum in Los Angeles and the Smithsonian’s Renwick Gallery in Washington, D.C.  She has taught ceramics at USC and UCLA.