Tree of Knowledge (aka Read)

To save this page, please use the following URL:
https://www.lacountyarts.org/civicart/objects-1/info/177 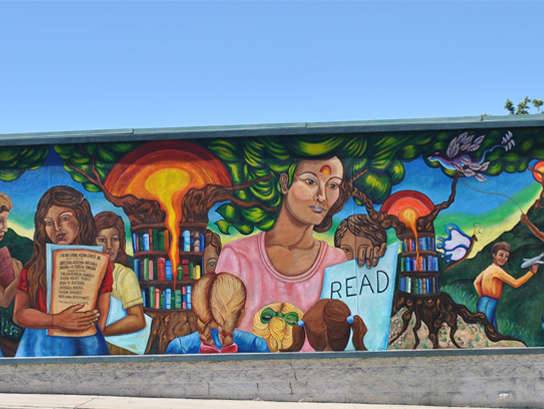 Tree of Knowledge, also known as the “Read” mural was designed by Teresa Chacon and painted in 1978 by artists from the Chicana Action Service Center under the direction of artist Josefina Quezada. In the center of the mural a woman reads to a group of children, on the left side several young women stand and sit reading books among trees. The tree trunks are also filled bookshelves. On the right, three children play on a hillside.  In 2004 a mural conservation effort was supervised by Josefina Quezada and a few elements in the mural were altered, such as an open book added on the far right which lists the names of the mural conservators. This book replaced a Pre-Columbian figure. In 2012 the mural was restored again after suffering from vandalism. Social and Public Art Resource Center (SPARC) restored the mural to the way it originally was painted in 1978.

Josefina Quezada, a Mexican muralist, came to Los Angeles in the early 1970s to help restore David Alfaro Siqueiros’ Amèrica Tropical mural on Olvera Street.  She has worked with artists from the Chicana Action Service Center to produce several murals in East Los Angeles, including one at Humphreys Avenue Elementary School.