What would you like future Angelenos to know about your Los Angeles? We are asking for your stories, memories, and mementos to represent the people, cultures, and communities that make up Los Angeles County for a time capsule to be sealed inside the Fort Moore Pioneer Memorial for a future generation to discover. This call is open to all residents of Los Angeles County, and entrants may submit an idea as either an individual or a group.

The time capsule is small, 18X10X8 inches and while would like to include as many items as possible, not all submissions will be able to be included. The Arts Commission is working closely with an advisory group comprised of community members from across the region to select items for the time capsule that are culturally, geographically, and historically representative of the rich diversity that comprises LA County in 2019. Items will be selected using the following criteria:

Decide if you are going to submit as an individual or as a group (for example: a class, family, organization, community group, etc.)

Submit your idea for the time capsule by completing the online form no later than Friday, May 17, 2019 at 5PM PST.

Please do not send the original item until you have been notified it has been accepted.

Since 2014, the Arts Commission has been working with the Department of Public Works on the refurbishment of the Fort Moore Pioneer Memorial located at 501 N. Hill Street in between the 110 freeway and Chinatown. The memorial will be re-dedicated on July 3, 2019 on the anniversary of the original 1958 dedication. The memorial depicts the first United States flag raised in Los Angeles in 1847 at Fort Moore after the Mexican-American War. It also acknowledges the pioneers and ranchos who worked the land, the prairie schooner that brought eastern settlers to Los Angeles, and the effects of technologies like water and power on the modernization of Los Angeles, emphasized by the 80 foot waterfall now operational for the first time in over 40 years. The pylon and flag pole area commemorate the Mormon Battalion and their westward march. While we recognize all of these as significant moments in history we also know these are not the only stories that make up the past, present and future of Los Angeles. 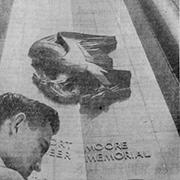 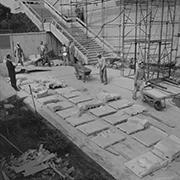 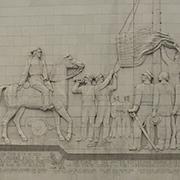