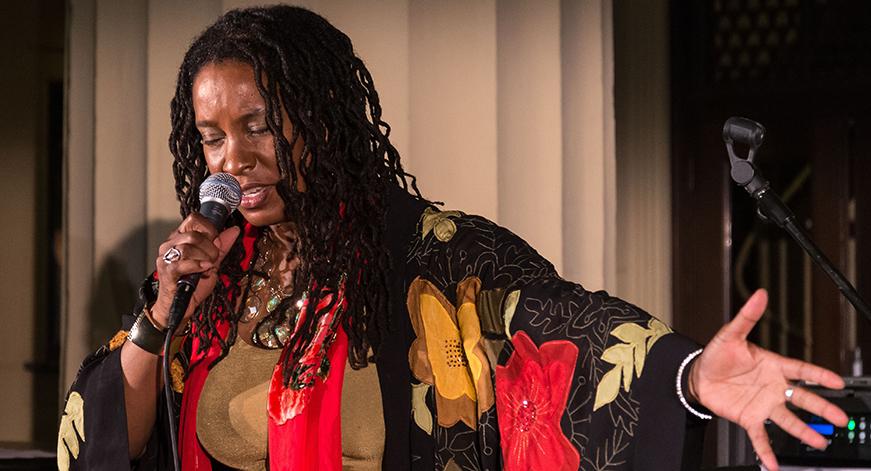 According to respected historian and Thelonious Monk biographer, Dr. Robin D.G. Kelley, AKA musical chameleon Dawn Norfleet has a "voice as lovely as silk and a flute style that would make Eric Dolphy smile.” Dr. Dawn Norfleet describes her own genre-bending original music as an amalgam of afro-diasporic sounds spiritually rooted in traditional jazz, with traces of african polyrhythm, western classically-tinged counterpoint, and a unifying swirl of African-American 70s funk. She enjoys challenging listeners (and musicians) with eclectic rhythms and melodies, while keeping them engaged with a solid groove and enchanting harmonies. In describing her own music, Dr. Dawn muses: "Imagine Herbie Hancock, Stevie Wonder, and Octavia Butler discussing revolution strategies over sips of fair trade coffee, with a Steely Dan or an Earth Wind and Fire album alternately playing in the background.” She's equipped with a solid, three-and-a-half octave vocal range, a soulful flute sound, and compositions that demonstrate fluency in multiple musical languages. As a bandleader, she’s performed at LACMA, the Skirball Cultural Center, and the West Hollywood's Winter Sounds concert series at Plummer Park. As a composer, she has been honored as a fellow with the Jazz Composers Orchestra Institute in New York City, and is currently a Chou Wen-chung Fellow with the Gabriela Lena Frank Conservatory of Music. She has also been selected to participate in the prestigious Banff International Workshop in Jazz, in Canada. As a vocalist, she has sung on each of acclaimed saxophonist Kamasi Washington’s major recordings since 2015, and performed with his extended ensemble at Coachella, the Hollywood Bowl, and the Walt Disney Concert Hall. Her versatility in a variety of styles, from traditional to contemporary jazz, can be tempered to a variety of settings. Also a scholar, she teaches, lectures, and leads workshops at academic institutions such as Colorado College, Occidental College, UC Davis, Lewis and Clark College, and the University of Virginia. Dr. Dawn is an alumna of Wellesley College (B.A.) and Columbia University (M.A., composition; Ph.D., ethnomusicology).