The LA County Arts Commission and the LA County Department of Public Works recently uncovered a time capsule buried at the base of the Fort Moore Pioneer Memorial flag pole in Downtown LA. Originally constructed in 1957 to commemorate the first raising of the American flag in Los Angeles by troops during the Mexican-American War, this monument was designed by architects Kazumi Adachi and Dike Nagano, and features artwork by artists Henry Kreis and Albert Stewart. At the time of its installation the Fort Moore Pioneer Memorial was reported to be the largest bas-relief military monument on the actual site it commemorates in the United States. 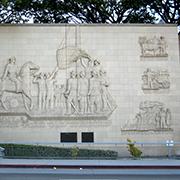 Located on North Hill St. in Downtown Los Angeles, the Fort Moore Pioneer Memorial depicts the ceremonial flag being raised over the historic fort on July 4, 1847.

In 2016 the Arts Commission and the Department of Public Works began a multi-year restoration of the artwork, and it is because of this restoration that the time capsule was discovered.

“[At the time of the monument's construction] There was a letter that stated that they wanted to do a time capsule, and that there were these proposed items that they wanted to put in it,” said LA County Arts Commission Civic Art Deputy Director of Collections Clare Haggarty. “So we were fairly sure that there might be a time capsule. But the fact that it really was there is very exciting.“

The capsule was opened under the guidance Conservator Donna Williams of Williams Art Conservation. It contained an array of photos and documents related to the fort, the memorial project, as well as life in Los Angeles circa 1957. One highlight from the capsule is a manuscript written by a May Belle Davis—who, according to the document, was a driving force behind the monument—that describes the idea and inspiration for the monument.

“Everything is in amazing condition,” said Haggarty. “In the same condition they put it in the time capsule. Nothing’s deteriorated.”

Curious about what was contained in the capsule? The Arts Commission hopes to digitize the contents of the capsule and make them available to the public. After which, the plan is to create a 2018 time capsule to be placed back at the base of the monument for future Angelenos to discover.