Creative Strategist Clement Hanami has been in residence with the Department of Public Health’s PLACE (Policies for Livable Active Communities and Environments) Division since 2018 working on the Vision Zero Initiative. Vision Zero is a County initiative to reduce traffic fatalities and severe injuries while increasing safe, healthy, and equitable mobility for all. Clement collaborated with County staff and community stakeholder groups to develop artistic interventions, strategies, and engagement plans to raise awareness of traffic safety issues. Through a series of workshops with seniors and youth and their families in the Collision Concentration Corridors (areas in unincorporated LA County with the highest incidences of pedestrian fatalities and injuries) of East Los Angeles, Walnut Park, and Westmont/West Athens, Clement developed temporary and permanent public art works, including a bike rack, billboards, and bus shelter posters. In the workshops, youth and their families created text and imagery for the billboards and bus shelter posters that convey the need for drivers to slow down and watch out for pedestrians. For Clement, it was important for participants to feel that their voices had been heard. He created works using their words and faces and placed them prominently in the neighborhood for all, including dangerous drivers, to see. The billboards and bus shelter posters were placed throughout the Westmont/West Athens neighborhood in October and November 2020.

In November 2021, Clement installed the bike rack at the Woodcrest Library. To coincide with its installation, the library worked with Clement to create a display of the artwork, and invited workshop participants to attend a viewing with the artist. Two additional billboards were installed in the neighborhood from December 2021-January 2022. 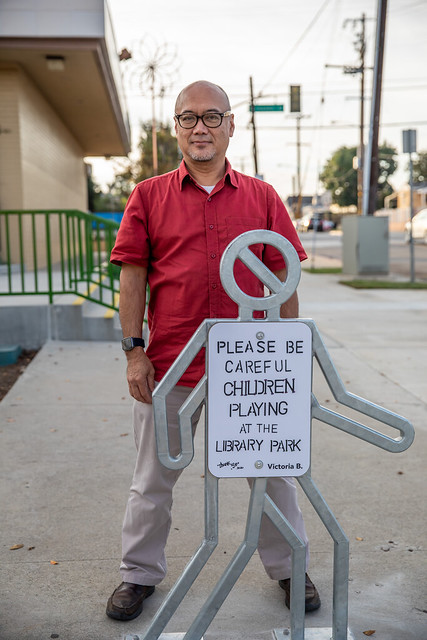 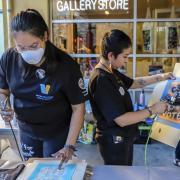 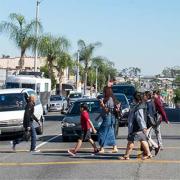 Learn more about the Vision Zero Initiative, which aims to reduce traffic fatalities and severe injuries while increasing safe, healthy, and equitable mobility for all.