"I came to this role from community organizing and I don’t currently differentiate. I think the more people who come from system-impacted communities and families who are able to shape the many changes currently taking place, the better.” —Irina Contreras 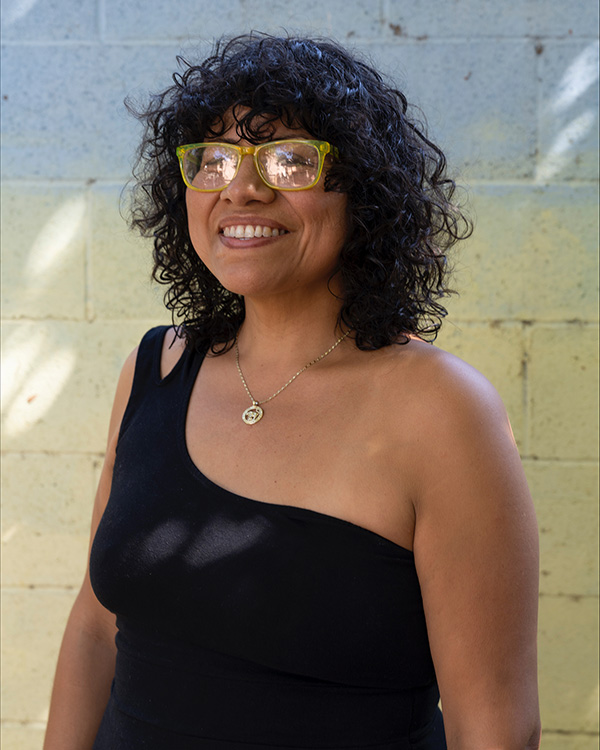 Irina Contreras (pronouns: they/them) was 14 years old during the 1992 LA uprising, and Rodney King was beaten just down the street from where they grew up in Pacoima. The area was known amongst locals for the many police abuses it had historically endured. “I was young, but I definitely had feelings about it,” they said.

When they got to high school, Irina participated in walkouts against then-Governor Pete Wilson, was part of the LA Riot Grrrl chapter, and attended workshops and teach-ins at the New Black Panther Party Vanguard space in L.A. The events created a pathway toward further investment in community organizing, often at the intersection of justice, arts and education—Irina was waking up to politics and thinking about how the justice system had impacted their life, and the lives of those around them. Growing up in Pacoima had benefits, but there was also no shortage of hardship and tribulation. The effects of the carceral system and policing were visible under their own roof, and extended throughout their community. Irina was raised in very intergenerational household, shepherded by their grandparents.

“As a teenager, I didn’t sense that there were possibilities for me. I think in my two undergrad experiences, there was a degree of running away, and seeing what, if anything, was possible. Like many youths, I didn’t have support, in terms of going to college or even knowing how to navigate those or related systems,” Irina said. “My parents and aunties came from the generation of being routed into auto classes or home economics, depending on their gender.” Since most of their family didn’t attend college, Irina didn’t have many people to ask about school.

Eventually though, Irina figured out a way into community college—or as they joke, all of the community colleges in Los Angeles. “I went to so many,” Irina said. “I was trying to figure out what to do, like a lot of youths that I work with now.”

Irina had always been interested in photography, so when a friend pushed them toward a Portfolio Day, they found out about the photography classes at Santa Monica College and added SMC to their growing resume. That led to a scholarship at the San Francisco Art Institute and then a degree from LA’s Otis College of Art and Design in 2004. Their visual art practice involves performance, installation, and video—and they have maintained it while also trying to center a more expansive view of integrating cultural organizing and many other interests.

Irina always needed and wanted a community or “scene” that supported people regardless of educational privileges or cultural capital, so they started a consulting business with a partner that was founded on the idea of sliding scale fees. Their clients were often people who had health and chronic illnesses that couldn’t be solved by regular and longstanding government frameworks. So just as they had with education, Irina began to think about not just the client service itself, but the way that the service was delivered. They wrote about mutual aid and giving circles for feminist publications, they worked in production and supported their cultural work and organizing by taking freelance video editing jobs, and they tried to keep a schedule with enough room so that they could do art projects at the drop of a hat, including art residencies in the U.S. and Mexico.

In the early 2000s, Irina worked in education at several museums including MOCA and LACMA, where they facilitated Living With Art: Art in the Home, which brought art programming to young people’s schools. “It showed me how you can successfully carve out a space within community settings, with the assistance of an institution,” they said. “It’s really important to meet people were they’re at. With Living With Art, the museum was not the focal point—the people were.”

Irina eventually moved back up north, to Oakland, to work in an artist collective as a performer and production manager. They went to grad school at the California College of the Arts and completed a dual master’s degree in Studio Practice/Social Practice and Visual and Critical Studies. Afterwards, they worked at Museum of the African Diaspora (MoAD) in community programs and education while still working on their art—but they had also begun to think about moving back to Los Angeles.

Once back in LA, they had their child, Ixi, and continued to teach and consult. A friend showed them a job listing at the Arts Commission (now the Department of Arts and Culture), as a consultant on work surrounding the Countywide Plan for Elevating the Arts as a Criminal Justice Reform Strategy. They applied with some uncertainty, and were surprised by an immediate call back. “I understood that the role was to mediate and concretize day-to-day logistics between institutional forces within the LA County Probation Department, the Commission, and community-based organizations,” Irina said. “Because I had been very involved in organizing around ending carceral systems for kids, and being a systems-impacted kid myself, as time went on, I gathered a lot of experience navigating bureaucratic systems. By this point, I had also gone through several years of volunteer legal help with the National Lawyers Guild as well as coordinating rapid response networks.”

“I came to this role from community organizing and I don’t currently differentiate. I think the more people who come from system-impacted communities and families who are able to shape the many changes currently taking place, the better. There’s so much work to be done and it really does require everyone,” Irina said.

“If someone had told me years ago that the city and/or county would be a part of embedding healing system arts among systems impacted groups and intergenerational folks, I wouldn’t have believed it. Nor would I have thought I would have been a part of a group that could move that within the county—but I have been pleasantly surprised to see that I was wrong. I am truly blessed and honored to work with the most amazing group of folks in Arts Education. Our community and agency partners make my day-to-day so worthwhile.”