"I went on a quest to see if I could stay within the confines of entertainment, but use my power for good." —Madeline Di Nonno 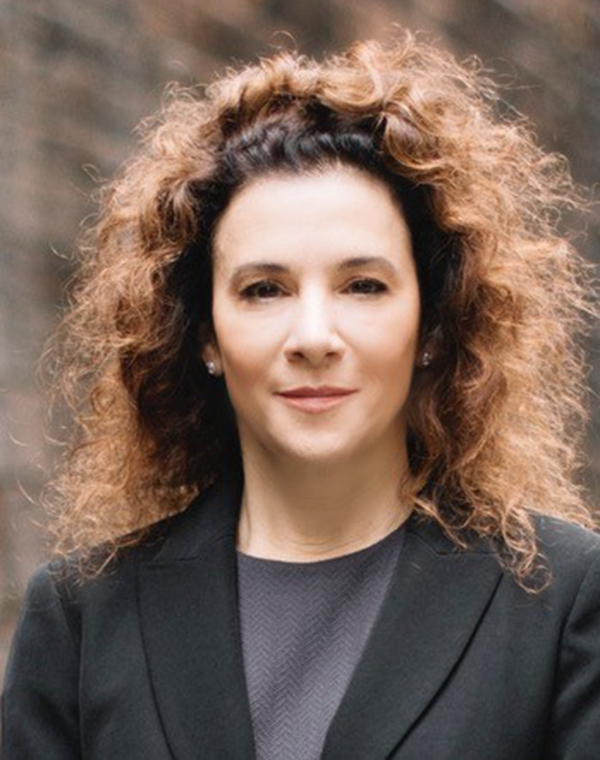 Madeline Di Nonno’s career trajectory brought her from intern to CEO, from East Coast to West Coast, and from for-profit to non-profit. She has marketed both consumer products and content, and developed business in media—using a blend of Brooklyn tenacity, networking, and leadership skills she modeled from the exemplary executives she’s studied her whole life. It has all culminated in a 13-year career as President and CEO of the Geena Davis Institute on Gender in Media, which advances gender balance, fosters inclusion, and reduces harmful stereotyping in the entertainment and media industries.

Growing up, Madeline was surrounded by teachers and artists. She was always in love with storytelling—TV and movies, and profiles about female leaders she found in magazines, and yes, obituaries. Her first job out of Boston University was in publicity for ABC in New York. After a few years though, with a waning interest in a PR or audience relations career, she left television to try her hand at product development and marketing. The range of the products she promoted was vast—she’d find herself in department stores for Lancôme one year, and state fairs for Pepsi vs. Coke taste tests the next.

When she wanted back into the entertainment business, she networked like crazy and sent her resume to executives in custom cardboard boxes via Certified Mail, eventually scoring a job as the director of brand marketing for MCA Universal Home Video in California. Executive roles at the Hallmark Channel, Anchor Bay Entertainment/Starz Media, Echo Bridge Home Entertainment and Nielsen Entertainment followed. She became a CEO for the first time at On The Scene Productions, a leader in streaming and content creation and distribution.

But then came an epiphany: Mid-career, Madeline took a hard look at her passion for social impact, and decided to transition from for-profit to non-profit. I went on a quest to see if I could stay within the confines of entertainment, but use my power for good, she said.

While she figured out her next move, she took a consulting gig at EIF, the largest and oldest entertainment nonprofit. She opened her playbook and connected with executives that had made the same transition—to determine if this kind of transition could work. Her friends questioned it. I was one of the few people in Hollywood that wanted to move into nonprofit. Madeline said. And at the same time, Geena was on a parallel path. She had started her organization, and determined that she needed an executive with both entertainment and nonprofit experience to take her vision to the next level .

Today, Madeline guides the Institute’s strategic direction, fundraising, programs, research, financial, and operational activities. The way that we approach our theory of change is through onscreen representation in content, and being able to use entertainment media as a force for good instead of perpetuating negative tropes and stereotypes, she said. The key to our success is that we use data driven advocacy to engage and inspire leading creators to make better decisions on how they represent diversity, equity, and inclusion in their projects. When we put facts in front of people, you can’t argue with them.

The Institute’s team is filled with a diverse group of researchers and executives, and a quick Google search shows the breadth of its influence. In the last few months, Madeline has advocated for a less stereotypical portrayal of Muslim women in media, so that Muslim girls can see unique and inspiring female characters that demonstrate the realm of possibilities for them in society and in their lives. The Institute’s research has inspired Lego to remove gender bias from its toys, with Madeline explaining that stereotypes shape our split-second emotional responses and judgments of others in ways we may not be conscious of, so media reinforcing negative stereotypes of people of color produces real-world discrimination. And she has spoken about a new partnership between the Institute and CreativeX to study diversity representation in advertising, because female characters are historically four to six times more sexualized and less depicted as leaders. And marginalized communities, LGBTQIA+, people with disabilities, they're not even anywhere near the baseline population.

Madeline says in many ways, running the Institute is like running a business—it’s all about the moving the needle on progress and having the funds to scale. But it’s a much easier ask when you’re changing the world She also produces: she’s an Executive Producer on the Emmy-nominated, People’s Choice and Gracie award winning television series Mission Unstoppable and the Gracie award winning feature film This Changes Everything.

A few years ago, a friend from the Television Academy Foundation, former Arts Commissioner Norma Provencio Pichardo, and Commissioner Constance Jolcuvar persuaded her to pursue a spot on the arts advisory body. I am an avid artist and grew up in a family of artists, it’s very important to me, Madeline said. When I moved to California, I wanted to do something in the arts nonprofits, but I didn’t have an inroad until Norma and Constance approached me. It was a bucket list role for me. My lifelong goal is to be firmly in the arts. Madeline says her job at the Geena Davis Institute and her role as a Los Angeles County Arts Commissioner are connected through the mutual fight to build cultural equity. The Department of Arts and Culture is choosing whose story they want to tell by the grants they give out and the programs they offer, and so its equity strategy is very important. We need to make sure we’re telling representative stories. Those stories manifest in creativity, and that creativity ends up in pop culture, and pop culture has a massive influence on humanity and youth.